Showing posts from December, 2008
Show all

Smokin' in the Garage

Sayre, of SayreSmiles, is the host today. Naturally she wants to know about the holiday that just passed. She wants touching and wonder, and crazy, stupid, and funny. I can't cover it all, but here's my contribution to the cause!
* * * * *

On the 12th of December I drove the 6 hours to watch 7 month old little Caboose while Karmyn and Dave enjoyed a Saturday afternoon stage production and dinner. (You had to twist my arm, really!)

I also planned to enjoy the Christmas program in which Buttercup and Jammin’ would be participating, bake a cake with Buttercup for her mama’s birthday, and then head home for a week and come back with Grandpa for Christmas.

Then it started snowing.The forecast was cold and white.School was cancelled, and thus the performances by the children.

Between storms, I drove home on compact snow and ice.

More extreme weather arrived, and I-84 through the Cascade Mountains was closed.We (grandma and grandpa) would definitely not be driving anywhere for Chris…
37 comments
Read more

December 26, 2008
On Christmas Eve we encouraged auntie Fern to remember and share some of her childhood celebrations. This one was probably somewhere around 1915 :

Oh! When I was really small, we hung our Christmas stockings, and we got an apple and an orange and I don't know if there was more .


We were excited to get that.


So Paul and Roy, they hung theirs up again the next night.


And you know that Grace, she decided to find something else to put in them. I don't know what she put in - probably something silly.


And, then those boys hung them up again the next night. And Grace found something else to put in them.


(Aunt Fern begins to chuckle at this point. We love to hear her laugh.)


On that third morning Grace really surprised them.


She put dried horse manure in their stockings. 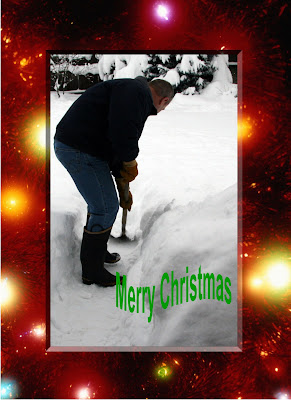 Happy Holidays - whatever you celebrate.

Blessings -- may they fall and surround each of you with love and joy.

December 23, 2008
This morning my husband asked, "Hon! What happened to your list of blogging friends?"

Although he is not interested in blogging, I guess he checks out some of my favorite haunts when he has a few minutes. Who'd've thunk?

He is now aware that my blog roll is under "View My Complete Profile."

This may not be quite as convenient for readers, or for my husband.

But it is great for me. I love this feature recently added to Blogger. When I log into the dashboard , I am able to scroll through the new posts and edit my reading list with ease.

That "editing with ease" may be a problem, as I keep finding more and more blogs that I love to read.

I wish someone would pay me to read blogs. (Isn't that the fantasy? As long as I don't have to put an advertisement on my blog.)
22 comments
Read more

I would be one of them (old timers), but I grew up in the Seattle area.

However, I do admit to memories of the winter of 1969 when the Puget Sound area had one of those freak snow storms. Eighteen inches blanketed our small farm.

We have that much here tonight and more falls as I write.

I discussed the snowstorm with with my friend Glenda on the phone this evening and it went as follows:

Me: I can't believe it is still snowing, isn't it just beautiful?
Glenda: Yeah. At first it was pretty. Now it's just STUPID!

(She has to go to work in the morning, her husband is recovering from leg surgery, she doesn't have snow tires, she's out of sick leave because she used it all when she broke her leg during the last big snow, she was worn out from shoveling, and she was a little misty eyed from having just received a letter from her son in Iraq.) 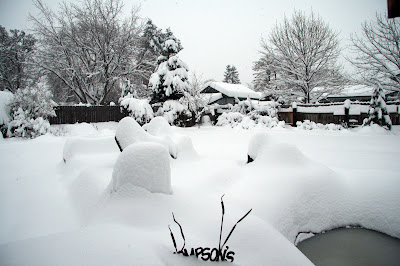 This weeks challenge byCarmi at Written Inc is Quiet.

We stored the patio umbrella, but somehow never got around to taking down the deck chairs by the pond. Now they are icy silhouettes beneath a foot of snow.

There is something about the snow that muffles the ordinary sounds of life going on beneath or around it.

The water continues to circulate in the fish pond without me detecting the usual hum. My husband assured me that the pump was working and pipes would not freeze.

The birds at the feeders across the lawn are chirping, but their chatter is swallowed by the stillness and consumed.

I think if I should speak aloud that the words would freeze and be buried by the the rush and hush of the falling snow.

Even the crunch of the snow under my (much too short) boots is interrupted by the sound of silence. 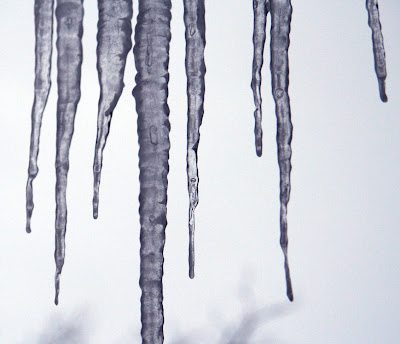 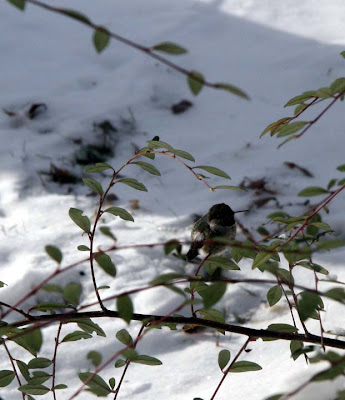 Thank goodness I'm not really on the road, but safe and warm at Karmyn's house. They blame me for bringing the icy cold winter.

My road home includes all the icy pile ups on I-5, I-205, and I-84. The last highway can be an extremely treacherous journey on the Columbia River Gorge where it cuts through the Cascade Mountains. I don't have chains or studs - just walnut snow tires.

Last night I had trouble falling asleep as the wind knocked on the side of the house. It seemed that I just drifted into slumber when something woke me. At first I thought it was the cat jumping onto the bed. Then I revised my theory as the movement and sound surely was something larger, like a dog.

"Hi Grandma, " Buttercup said between chattering teeth. "Can I crawl in bed with you?"

I opened the covers and she snuggled in. Before long I had to send her back to her own bed - she is a wiggle worm.

The Secret To Feeling Really Young

(No photo. My camera is in the shop.)
34 comments
Read more 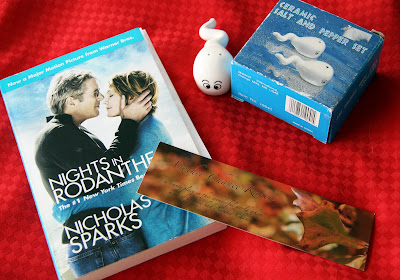 I won two recent giveaways. My mailbox thought it was Christmas.

Nights in Rodanthe was one of the books of the several that have been featured at Another Chance Ranch and her From My Bookshelf To Yours series.

All read! Loved it. I'm going to give the book to my daughter and then let her pass it on.

Notice that Julie also provided her Another Chance Ranch Bookmark.

Lisa's Chaos is responsible for the ..uh...ahem.. the.. uh... SALT AND PEPPER SHAKERS. The hubby asked me if I was going to use them. I'm sure it is because they are very petite, and my hubby really loves his salt and pepper. It would be a full time job just refilling them. Yes. I'm sure that is what is worrying him.

Look at them. Aren't they cute.


The shakers should become a hot potato giveaway. You know...one that keeps getting passed on to the next blogger. Like the Old Maid in the Old Maid Game, or the Bear in Pit.

Mamalang is today's Fun Monday hostess and is curious about our favorite Christmas Carols.

Do any of you know The Wexford Carol? It is one of my three favorites and I came upon it by accident when I was looking at You Tube selections. It is the first full song on the embedded video. The setting is the Julie Andrews 1987 Christmas Special. She would be my first choice to perform it for you, too!

Now I really hit the Jackpot when I found this. The next song is the late John Denver singing What Child is This(tune Greensleeves.) Another favorite song from another favorite singer.

This post is like one of the Ginsu Knife commercials, because, WAIT! There Is MORE!
For only a few minutes longer you get to hear Placido Domingo performing Ave Maria!

It doesn't get much better than this.

Had she asked for Christmas songs...well, I love White Christmas (Bing Crosby), Chestnuts Roasting on an Open Fire (Nat King Cole), and It's a Holly Jolly Christmas (Burl Ives.) Oh, I know... I…
22 comments
Read more

The "Bite Me" that Backfired.

December 06, 2008
Some of you know that I had a cracked tooth extracted and I am on track for an implant.After wasting over a year dealing with the inept medical office of an oral surgeon, I asked my general dentist to send me elsewhere.The referred specialist is a much better fit for me.His office functions like a synchronized swim team.He is confident and efficient.The only thing that bothered me is his weird sense of humor. Every time my mouth was occupied with fingers and stainless steel instruments he would joke without mercy. Just two weeks ago I was stretching my jaw as far as it would extend, when he started. “Oh NO!” He gasped. “It’s not there! You've sucked it into your head!” I rolled my eyes – which was a much more relaxed response then my first wide-eyed terror to one of his remarks. My guess is that he is just a serial tease, so I always watched to see how the hygienist responded and then ignored him.But I don’t forget.That’s why I decided to get him good at my last appointment. I …
32 comments
Read more 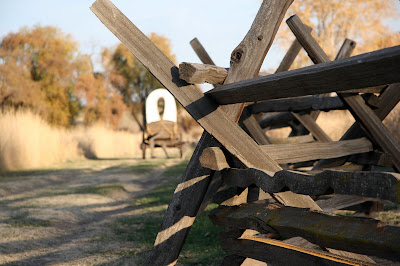 Carmi has chosen "Shadow" as the theme of this week's Thematic Photographic challenge. As always, he leaves the interpretation open to any of us who choose to play along.

My camera took this photo, but my lovely daughter Amanda was the artist behind the lens. She captured this moment on a late October afternoon at Whitman Mission National Historic Site.

Yes, the shadows along the Oregon Trail captivated my imagination. But, not the castings from the setting sun.

Instead, I was there beneath the shadows of men and horses. I heard the echoes of children racing after wagon wheels. And, I felt the cool breeze through the hair of a pioneer woman as she shook it loose from a sweat soaked bonnet. 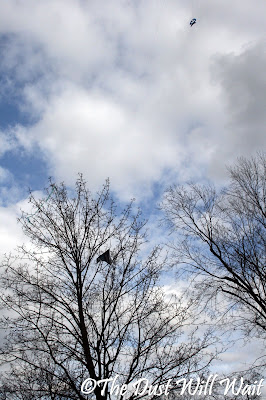 Can you spy the string and the holder.
Click on the photo for a closer look.

Fly on over to Wordless Wednesday headquarters for this weeks gallery of photographs.