Showing posts from September, 2020
Show all

Smoke Gets In Your Eyes (and nose and throat)

September 25, 2020
A week ago we had rain and then sunshine.  A grand and totally delightful end to eight days of being smoked like a rash of bacon.   Thus the title above that might make you want to do some memory moves with The Platters. The Air Quality Index runs from 0 to 500.  I was shocked to see the red line hit that and rise beyond the measured quantity.  Mentally and emotionally taxing as well as physically harmful. Rain has blessed us once more the past two nights. Hopefully enough to be a wild firefighters wet dream. Now I can take walks again if my right foot agrees.  Surgery on the left foot in late February put me in good standing to stay seated and home in the early days of the you know what.   To keep on the right footing I am planning another surgical round of  "The Hokey Pokey" with the podiatrist this winter. Meanwhile it seems like all my "annuals" have somehow coagulated into a September sludge of visits to every medical professional in my life.  My eye specialis
1 comment
Read more 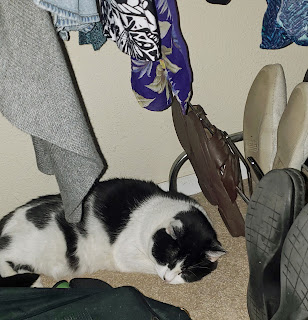 Our kitty cat needed us.  We struggled with the decision.  But we knew she needed us to make the right one. We miss her. ***** ElGee was born in a litter of kittens in an apartment complex where a friend of our youngest daughter lived. Amanda already owned a young cat named "Baby" when the friend contacted her in an effort to save the kittens.   "I'll take one," our daughter committed to be part of the unorganized rescue.  The teeny white male she named McGarnigal.   The even tinier black and white female, that she temporary dubbed  'the little girl',  was also delivered to Amanda's apartment.  Little Girl had been promised a home by a third friend.  The promise was never kept and "Little Girl" became family.   Whispers from the first friend indicated the remaining kittens disappeared and she was pretty sure they'd been dumped.   A year passed and another little girl joined the family;  my now 16 year old granddaughter Curlymop.  Then
2 comments
Read more
More posts