Showing posts from 2016
Show all

Stop and smell the ... Blackbird 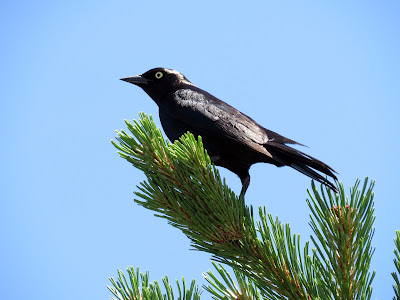 We often forget how much beauty there is to behold in a common Brewer's Blackbird.
4 comments
Read more

Conversations ... with Greats, Grands, and even myself

January 06, 2016
In chronological reverse order with most recent starting today! 3 1/2 year-old Squeaker Squeaker:   Mom, will you  hand me the remote? Mom:   It's sitting right next to you on the couch . Squeaker, following hysterical laughter:   Mama!  I tricked myself. Great Auntie Fern, who will be 107 in April. The past year she is often lost in time. Occasionally her true self and humor will pop out when you least expect it. Yesterday at her medical check-up the Doctor determined that one ear needed to be flushed of  the excess wax build up. She had had some moments of clarity but was mostly unable to hear what was being said and was generally confused about where she was and what was happening.. As though waking suddenly, she turned and looked at the Doctor with her one eye and chortled,   "Oh MY!" . Fern gestured at the little bucket the nurse held under her ear and exclaimed with delight,    " Looks like soup for supper" Fern then lead the
2 comments
Read more 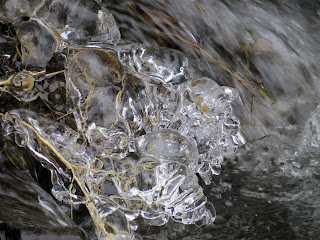 I took a short walk up the creek in the cold.  My attention was drawn to a song sparrow flitting down to hide in the wintry browns speckled with snow along the water's edge. That is where I spotted the little dead plant hooked on a rock mid stream, growing an ice sculpture off the splashing current. It was probably 12 inches across and I wondered if it would continue to build   Or, will the dancing rill eventually shake its delicate art free and send it downstream.
3 comments
Read more
More posts