Showing posts from February, 2007
Show all

Whippersnapper definitely shows signs of snapping. However, I'm delighted she hung on long enough to write this excruciating yet funny family breakfast saga. Apologies to her Mr. IQ for bringing it all to your attention.

To see other nominee's for perfection please at :www.suburbanturmoil.blogspot.comand www.petroville.com 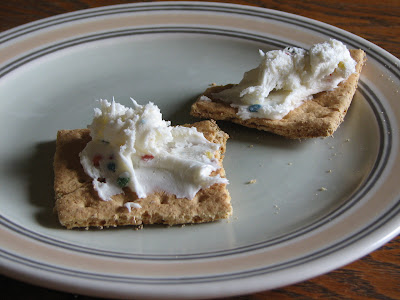 My mom made cookies, cakes, and pies when I was growing up. It was usually for a special occasion.

Once in awhile we would beg for something sweet after lunch. Baking was time consuming, so she would grab a bag of powdered sugar, add some rich cream and butter (from our Guernsey), and add some real vanilla.

She named it GOOEY on cracker. That was its name. We named things when I was a kid.

When I treated my own children to GOOEY on cracker, I didn't always make my own GOOEY. I would cheat and buy a can of frosting from the grocery store.

I had some leftover frosting today - and I couldn't help myself. I even took a bite before I took the picture.

All you need is graham crackers and frosting.
27 comments
Read more 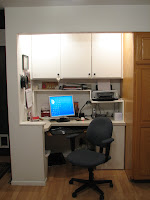 This is my little corner of the family room.
I have a computer, a printer, cupboard space that is
filled with the hubby's computer books and
everything else I needed to hide to clean up.


My Hummingbird calendar is at my left
with my bird book and bird diary.
My book of days (a daily devotional)
and the submarine clock which I
always forget to wind. I have a heart shaped
shell that hangs above my workspace and
I don't even remember why.


Just to my left is a bookcase that also holds
grandchildren's come to visit toys.
The hubby's aquarium.
I painted some little fishy's and they hang
right above the live ones.


My art table is hiding behind the
love seat. The three pastels are of
my three beautiful daughters, done
by someone long before I took
up a brush.

The rest are family photographs.


Keep going clockwise left and you
will see our fireplace, coffee table,
couch and other miscellaneous
wall hangings. Look carefully
and see the hubby's retirement
hatchet and badges.

"SO THERE!" says mother nature 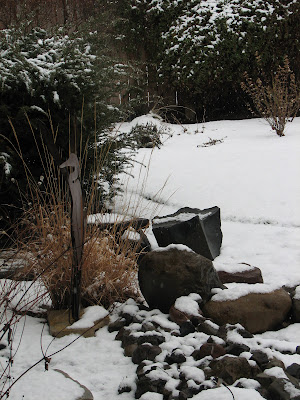 Saturday we said Hello to Spring and 70 degrees.
This is today:
22 comments
Read more 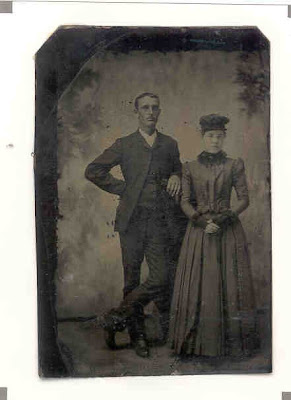 It was Kansas in the late 1800’s and there
were corn fields to tend, laundry tubs to empty,
pigs to butcher, and a baby in the chute. Always babies.
John Dodd, a stubborn Welshman, was determined to head west. Oregon? Washington? – he wasn’t sure. He just knew that the Northwest was his destiny.

As the wagon rolled across the prairie, his beautiful wife Alice, three daughters and two sons waved until their friends and extended family disappeared in the distance.
The years rolled, too, -- the twentieth century arrived.In August 1902, another girl was born.
She weighed 7 ¼ lbs on an old farm scale in a tent inMilton, Oregon.
Her
mother
chose
the
nameJennie, after her great grandmother.


It was not long after that the family began to homestead on what would become the family wheat ranch in Touchet, WA.The small house their dad built sat on the south side of a hill that sloped down to an old rambling dirt road.It lead to the bustling little town of Touchet (pronounced Two She) where the Dodd’…
21 comments
Read more

We bought three "Grandmother Remembers" books for Christmas 1983. One for my mother, one for the hubby's Gram, and one for his mother.

Eighty-one year old Gram spent the next year working tirelessly filling every page. She even wrote and pasted pictures in the table of contents.

In the excitement of wrapping it for the hubby and placing it under the next years Christmas Tree, she could barely contain herself. When he opened it and began to leaf through her memories, she wiggled, giggled, smiled, and cried until all her wrinkles were filled with tears.

My mom died in 1993. We found the partially completed remembrance in a book shelf in her house. She worked on it slowly and thoughtfully. I guess I'm a lot like her in that I set things aside with the intention to get back to it soon. Although I look at the empty pages with some regret, the ones she completed are real to me. On them I…
43 comments
Read more 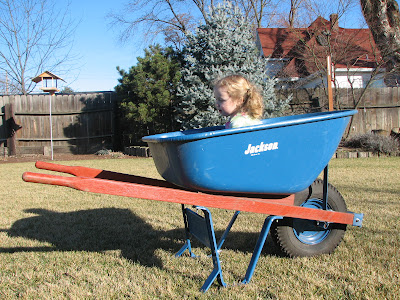 Distracted. In the best possible way. A 70 degree afternoon in February.

We chased our shadows, visited the slide at the park, and let mommy go visit her friends.

February 15, 2007
I heard it begin tapping on the sky window last night.

However, you won't hear me complaining. Especially after reading about 12 feet of snow in that little town in New York.

This morning ABC news showed a video at least 10 times of a semi-truck smashing several cars into a state patrol car. It was recorded on the patrol cars front camera. Other video's featured sliding cars and pedestrians, snow removal from the roofs as well as streets, and other snow related misadventure.

GMA interviewed passengers who sat inside jets on tarmacs for up to 10 hours. Their Valentines Day trips to tropical islands became a day in hell. (This is not the first time I've heard about an airline holding hostages for that long. There should be a law)

I know there are places …
24 comments
Read more 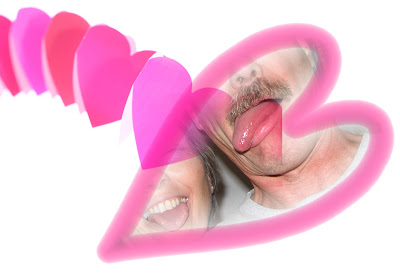 We are so romantic.
26 comments
Read more 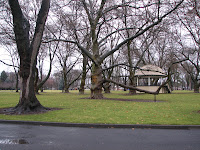 Our town fathers were visionary. They planted trees and designed streets to showcase original architecture. Current civic leaders are committed to revitalizing the old and carrying on the tradition of creating beauty and substance. (click on the photo for a better view)


This year all of our snow fell in Colorado or New York.
The trees are naked, but not ashamed.

There were trees on every corner.
Wind, age, and disease take their toll.
Most property owners replace those lost.


On a rainy day I see their reflection.


They have spread their branches
over many changing seasons.

An old evergreen provides color in stark
contrast to the gnarled ancient deciduous.
But, their glory will come with summer.

Pretend that is a moat around
a castle. It rained much last night.

A house and tree from
my non existent passenger's view.


One of the six elementary schools.
The structure on the far right was built in 18…
42 comments
Read more

Don't blame it on age, necessarily

February 10, 2007
On Wednesday, I returned home from work and took off my earrings. That is when I noticed they were not a matching pair.

No one mentioned it to me. The next day when I chided one of the younger women about not speaking up she said, "Honestly, I didn't notice it."

This comes on top of my disappointment at the ocean. We were preparing for a walk up the beach, so I opened my suitcase and removed the plastic bag carrying my heavier shoes. One shoe went on my left foot before I realized the second shoe was from a different pair. I would have shrugged that off and worn it, except it was also for my left foot. Trish and I sat on the floor and laughed tears.

I would blame it on my age, but I did things like this when I was younger.

In my mid thirties and my youngest was still playing dress up, I gave her my older high heels for fun. She must have left them out one evening and the hubby picked them up and threw them back in my closet. The next day I ran an errand during my l…
30 comments
Read more

February 08, 2007
Wolfden Bar & Grill is a Soap Opera with each episode being written weekly by a different blogger. The story line has been all over the map, both in plot and place. The first seven episodes can be read at the following links.

If you haven't been following the story, you should probably go back and read the previous episodes or you may think that I have lost my ever lovin' mind. Oh never mind, I probably have lost it. I can't believe I wrote this.
Apologies to those who have not been privy to the names and references that follow. Here is the long awaited Episode Part Eight (Hysterical Amnesia and Gas)


I have a prescription pad,” Dr Rob groaned and turned his head slowly while his fingers massaged the back of his neck. 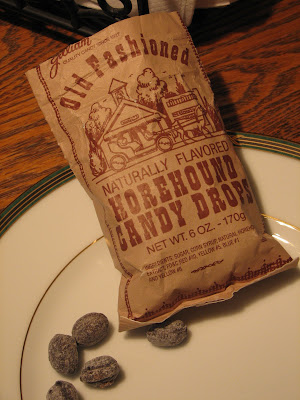 Was it really that long ago?

The last time I tasted HOREHOUND CANDY DROPS was when Lyndon B. Johnson was the U.S. President.


I didn't like Lyndon Johnson because I saw him pull his Beagles up by the ears and make them cry.


Another occasional candy treat that my daddy brought home on payday was CHICKEN BONES. Can you believe those odd confection names?


Now I am a Hershey's girl. A rich, dark chocolate bar with nuts is about as good as it gets.


Nevertheless, this little taste of yesterday ended a less than satisfactory day on a sweet nostalgic note.
38 comments
Read more

February 04, 2007
Today I'm participating in Memorable Post Selection in the Third edition of what is now dubbed Fun Monday.

The posts chosen are important to me because each was my first impression of someone that I now consider a friend. A year ago, I was hardly aware of the blogging world, so having friends that I've never met in person is a new and intriguing experience.

Babe in The Mud was my introduction to the menagerie over at Another Chance Ranch. The near loss of her prize Percheron is documented in pictures and vivid descriptions. Julie has a wonderful perspective on people and life. Kind, considerate, warm and knowledgeable are adjectives I would use to describe her. I have to warn you, however, never to mistake her prize draft horses for mules.

One day I read some comments on another blog by Willowtree. I began lurking, so to speak, and reading some archives to see if he was as gnarly as his comments portrayed him to be. He was. Yippee, I can have a shower! convinced m…
18 comments
Read more

Scenes from the Beach 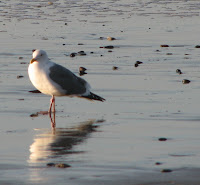 
Beach Bum in my sights 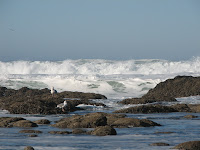 Late Friday night I stood at the window that faced the ocean and saw something more than the incoming tide claiming the beach.

I grabbed my binoculars and then my bird book.

In the moonlight and the lights from the motel, I could clearly see over 100 little Sanderlingsrunning in the surf. They were doing exactly what my National Audubon Field Guide described. "As a wave comes roaring in, the birds run up on the beach just ahead of the breaker, then sprint after the retreating water to feed on the tiny crustaceans and mollusks left exposed."

We turned off the lights in our room and we sat our chairs by the window to watch the little shorebirds antics. For well over an hour past our bedtime. They looked like ice-skaters because we couldn't see their legs moving. Back and forth they glided, always right below our window in the foamy breakers that at high tide were within five feet of the retaining wall. We walked down the outside stairs for a few minutes and could hear the&quo…
28 comments
Read more
More posts