Kitten (Kitten's homeschool) is today's lovely hostess for Fun Monday. She wants to know about our house and the street on which we live. A prize will be awarded to the person living in the oldest house. That won't be me. However, the original homestead in the area sits on our back fence. I hope she enjoys the picture I included of it.

We live on a quiet street - except in the afternoon when the high school kids decide to use it as a short cut.

When we moved in there were many open fields with cows and horses, but there were also many new homes.

When our neighbor Bill moved in over forty years ago, there were only two other houses nearby. He and his late wife raised their five children in a 1923 era home with an unfinished cellar, unfinished dormer style upstairs, and only two bedrooms on the main floor.

It sat on a dirt lane in the 60’s. Barbed wire fences contained the horses and cows. The chickens, however, wandered wherever they pleased. His kids rode their horse through the fields and up the slopes of Stubblefield Hill where the old Boys Ranch was abandoned and crumbling. Bill spent time up there gathering square nails from the old structure. The hill provided local kids with the best sledding for miles around. Now the hill and the farmland are covered with houses and asphalt. Several of the original creeks that babbled through were directed into culverts and disappear underground. I hear babblings now and then of returning some of those back to the surface. The south side of the distinct hill and the creek valley remained untouched for many years after we moved in. In the past ten years developments sprawled across the area.

Further north on our street stands the second house built in the 20s. The old couple that lived there passed away; now their son and his family have been slowly renovating it.

The third one, an old farm house that is adjacent to our back yard on the East, was built in 1902. The original owners never sold. After their deaths the house belonged to three different families prior to the 3 M’s purchasing it in 1978. That was the same year we bought this tract home from the original owners. Our and M’s daughters became fast friends, so the hubby added a special gate just for them when he built the fence. Our girls spent many hours catching frogs in the creek.

(pictures from this summer) 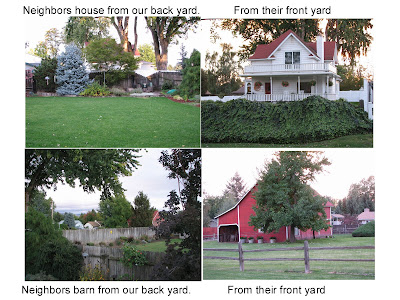 A red barn that belonged to the original homestead still stands. It was built sometime in the 1890s. M's started a winery in the 80’s which originally featured the old barn on the label. (They have since moved their successful vintner activities into a wonderful facility that attracts many wine connoisseurs.)

In the early part of the century the old farm was self sufficient, and the dairy provided the main source of income.

I’ve read some of the written accounts from the Lewis and Clark Expedition, and other early explorers and settlers. The native grasses were so tall that a horse and rider were easily hidden from view. That all changed with the Oregon Trail and the influx of ranchers, farmers, and settlements. Now the farmland is changing with the incursion of sprawling homes, vineyards, and commercial ventures.

When our girls come back for a visit, they are always surprised at how their home town has grown and changed.

Although I think of it as quiet, our street is a microcosm of the world around us.

I invite you to click on Kitten, and read other participants take on this Fun Monday assignment.

Peter said…
Its lovely to live in a piece of history Pamela, much nicer than the modern alternative... well to me anyway.

ellen b. said…
Pamela,
What a wonderful place you live in. It looks so peaceful. We live close to the highschool so the kids park in our neighborhood. My home is west of the Cascades. I enjoyed reading the history of your neighborhood.
3:59 PM, December 16, 2007

Gattina said…
The same like me ! Houses houses houses where before was green space !! I don't think that my house could be in your neighborhood, because it is of bricks and not wood. We don't have any wooden houses here in Belgium. I saw them for the first time when I visited my aunt in Madison.
8:47 PM, December 16, 2007

Mine's posted too, AND I also did a couple of poems this month for Robin too.

laurie said…
wow. i love where you live. the barn is gorgeous.
i love the idea of your spot in the world being a microcosm of all around you. that's not always true, but it's clearly true of you.
4:24 AM, December 17, 2007

Anonymous said…
As usual, great job! You have a wonderful way with words. I'd love to see the inside of some of these early 1900 homes.

Sauntering Soul said…
What a gorgeous house! And the history is wonderful. I think I could live in a place like that.
1:36 PM, December 17, 2007

Tiggerlane said…
You have such a wonderful way with words - I didn't even need the photographs to get a vivid picture of where you live....great post!
2:37 PM, December 17, 2007

Anonymous said…
A very interesting history, and the old barn looks so well kept for being so old. Very cool about the winery. I love visiting wineries in their locations, and I am sure the new place the winery has moved is very nice as well.
3:35 PM, December 17, 2007

ChrisB said…
That made such interesting reading. You have a lot of history where you live. It's so nice to see that old barn has been preserved. I love the idea of having the gate for the children. Did you write about that before or did I just imagine this!
3:54 PM, December 17, 2007

There are a few little pockets of Wichita that time forgot. You wouldn't even know they were there unless you were told to look for them. Those are the very best parts.
4:40 PM, December 17, 2007

Kaytabug said…
I just love historic places and homes! What a lovely story. Beautiful photos. It looks and sounds like a wonderful place to live.
7:23 PM, December 17, 2007

Kerith Collins said…
lewis and clark...that is so cool all the history you have in your area.
kerith
http://momdumchronicles.blogspot.com
8:51 PM, December 17, 2007

Anonymous said…
I was hoping to see your house...but you did talk about your street and that was part of the Fun Monday. Some of those old houses have so much character. The new ones...not so much.
8:35 PM, December 19, 2007 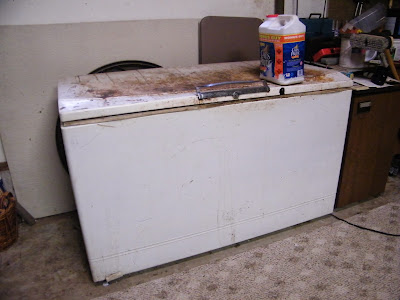 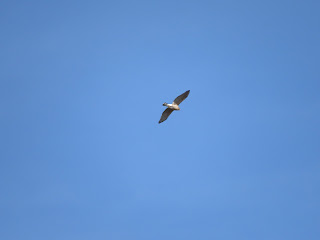